On sectorial crisis and law pitfalls

Although we used to think that it’s better to project small business in a big picture, we often suffer the lack or availability of appropriate analysis. Absorbed by tasks, weak in forces or distracted by hyper-activism of a interested counter-information, we remain in the wake of mainstream thoughts, anchored to biased and insufficient ideas to support/contest actions and decisions can limit our media agency. Indeed, after the great adoption of internet services, many policy-makers – directly or indirectly moved by sectoral complaints – asked us to take position against media piracy and practices that are destroying value and jobs in cultural industry. Even I prefer to write in a long form into my suchlike blog, I would have a hard task to face the whole arguments that these questions require to gain a clear view – thematic range usually starts with economy, touches law and inevitably arrives to democracy. When I tried to develop a thought it takes many pages, the space needed to check aspects, principles and points of view raised by changes electronic technologies introduced since 1980s in legislation, business and uses around media.
Yet past experiences left the desire to return on it when there should be availability of reports capable of lighting the big puzzle. The release of two studies – The sky is rising (2012) and The private and social cost of patent trolls (2011) – deserves a new intrusion in a period in which acronyms as SOPA, ACTA, PIPA, FRAD – the names of new and old kind of regulation – fill articles and debates on culture, technology and media. 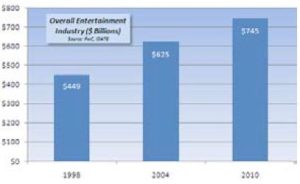 ute for Statistics, YouTube.com, etc. People used to hear complaints about media consumption will be surprised to read that money spent on entertainments increased 50% during the last ten years while family expenses, although the so-called free mentality, rose 15%. Of course, not all sectors benefited equally but positive trend is common. In brief, not only we are in a unique historical condition for content abundance, but “internet has helped the wider entertainment industry grow and thrive, benefiting both consumers and content creators in massive ways”. The whole data draw a picture that, even importing alternative critical points of view, is impossible to negate: a) “For consumers, today is an age of absolute abundance in entertainment. More content is available in more ways than ever before. If we simply go by the terms of the US Constitution’s clause from which copyright came, it seems clear that the “progress of science and the useful arts” is being promoted — even as copyright is often being ignored or foregone; b) “For content creators, it is an age of amazing new opportunity. Traditionally, to take part in the entertainment industry, you had no choice but to go through a gatekeeper, which served to keep the vast majority of people who wished to be content creators from ever making any money at all from content creation. Today, that is no longer true. More people are making more money from creating content than ever before — with much of that coming via new tools that have allowed artists to use the internet to create, promote, distribute and monetize their works”; c) For the traditional middlemen, the internet represents both a challenge and an opportunity. There is no doubt that the internet has eaten away at some traditional means by which these businesses made money. But, as the data shows, there is more money going in to the overall market, more content being created, and many new ways to make money. That shows that there is a business model challenge — and a marketing challenge — but much more opportunity in the long run. The key challenge for business is in figuring out how to capture more of the greater revenue being generated by the wider entertainment industry. Legacy players certainly face a lot more competition (and fewer reasons that artists have to do deals with them) — which can explain some of the public complaints about the “death” of various industries — but overall, it’s clear that by embracing new opportunities, there are plenty of ways to succeed”. 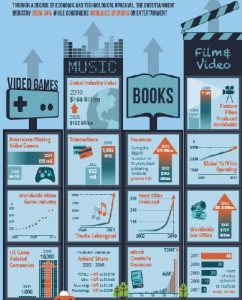 It is not the first time that cultural industry and telco operators face critical moments and reacting very well. Yet actual scenery of participants and the way to participate in changed dramatically. The success of digital technologies, the diffusion of sophisticated personal hw-sw devices, and their networked interconnection by inter-cooperative protocols have diminished the obstacles to enter in the content production and delivery, fostering positive externalities on every fields, first of all on those closely tied with R&D activities as hi-techs. To say, an interesting survey (2012) about all USA start-ups – by Ewing Marion Kauffman Foundation – reveals that 10,7% new companies have been established from single person to primarily satisfy personal needs. But, more surprising, 46,6% of these companies are just 5 years old. Briefly, while cultural industry complains about losses, big numbers show increments of revenue and household expenditures. At the same time, there is an increment of entrepreneurs wanting participate and all, old and new ones, have to reason – unless to impose restrictive and conservative rules – in a new context. Despite of official positions and natural temptations to exploit their influence, all players know well the real situation. The harsh challenge is the solution when there are people would prefer changes that leave things as usual.
On the other end, people try to give advices to improve aspects that could limit or, better, not feed collateral effects. For examples, there are sheer analysis (made by economists) about correlation between the time shift of movie released out of original country and the losses due to piracy. In short, audiences demonstrate to be available to consume movies through regular channels if releases are anticipated. Researchers invite producers to meet audience desire to contrast move piracy. But, to be clear, such delays are an integral part of movie selling strategy since box-office revenues are not the major source. Nowadays people go to the theater is only 10% – they were 65% in 1930s. The negotiation of copyrights for foreign countries along with time-shift releases on different delivery channels – theater, DVD, premium tv, pay-per-view, cable, video on demand, free-air, etc. – are a sort of artistic exercises to follow taste and desire of different audiences equipped with different home and personal technologies. The maximization of revenue is obtained – on the base of expectations and channels – through the wise management of “windows” but in an increasing variable scenery. Renting and selling of physical movie supports represent the major sources of revenue for movie producers since 1986. While 85% of revenue derived from box-office in 1980s, it reduced to 25% in 1990s. With digital recording technologies as DVD – the standard of home consumption since 1997 – started a new huge acceleration toward powerful and diversified kinds of delivery opening the liquid channels of downloading and (finally) streaming techniques.

The stick, roses and spines of law
Really, if we have to speak of sectoral crisis it concerns the resistance to change, the slow action to respond, and the desire to perpetuate position and high revenue from traditional players. Judges and Parliaments are so called – in the tribunal and legislative rooms – to mediate, always more frequently, between consolidated interests and emergent realities taking into account laws and ideas existed before these technological and socio-cultural evolutions. Yet, in so doing, they must pursue a general interest and a greater social good, the reason for which they have the (socially delegated) power to intervene. 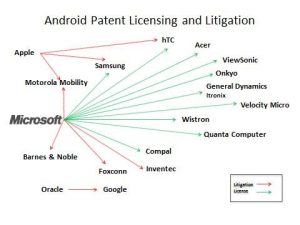 On the other end, the same problems assume a pathological relevance on industrial side because (almost) everyday we see new legal battles in the name of patent infringements against some new competitors. On this side we are in a irrecoverable condition. The disputes are extremely expensive while patents, above all software ones, are easily contestable – they are often described in vague terms with attached other series of technologies bringing long stories of previous developments. There is a huge awareness about the need to change the entire system. In effect, after the great success of internet and social networks as new form of communication and their expansion on every kind of device, competition among the wide range of operators is very hard. To cite one example, Google was “obliged” to buy ($12.5 billions) the company who invented the mobile, Motorola. The hidden scope seems the improvement of its patent portfolio, namely the defense of its new and successful mobile platform Android. The huge adoption of Google’s open source Android – it is present on 50% of worldwide smartphones and on a great number of tablet – feeds legal struggles that can shadow its next expansions or the same operational continuity by different mobile vendors. Being new in the mobile sector, Google represents an easy prey for competitors ready to put in question some mobile functionalities they have already developed and covered by some specific/generic patent. For example, after a win lawsuit for patent infringement, Microsoft receives some dollars for every mobile phone equipped with Android sold by Samsung, HTC, Acer. For the same reason Microsoft has initialized a litigation against Motorola that refused to pay the same royalties – Motorola is adopting Android for some models. In effect, Motorola can defend itself more easily from this kind of attack due to its huge patent portfolio on mobile devices. Not only; after Google’s Motorola acquisition antitrust authority received an interrogation by Microsoft and Apple to block the merger because new company could slow competition given its advantage in terms of patents; Motorola 24.500 mobile patents cover essential elements of mobile standard that – under a gentlemen’s agreement among telco vendors named FRAD – should share with competitors at a fair cost. Yet regrettable, we often see these facts as a collateral effect of the research of success, a loss of money otherwise remunerated. It is also true that lawsuits – as we see better – involve rich companies. But patent infringement is often used also to intimidate or stop small companies that could be dangerous as competitors. As Electronic Frontier Foundation is denouncing, patent lawsuits are a disincentive to innovate. 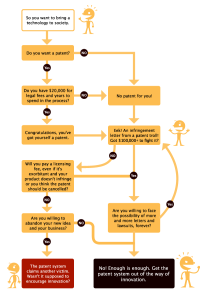 The private and social cost of patent trolls is just centered on the business around lawsuits for patent infringements. More precisely, it focuses on legal entities that learned to exploit the contradictions of patent system. NPE (Non-Practicing Entities) are organizations made to manage and defend patents own by small companies (also single inventors) that don’t have money to compliance legal procedures. NPEs don’t produce goods but their aim is to defend companies that operate in the market without any legal protection. Changes happened in the last decade in high-tech sectors/media and NPEs’ behaviors are lessening original social principles justified their institution. In the only 2010 US companies received 2600 legal solicitations, more five times than 2004. The losses between 1990 and 2010 were $500 billion. In the last 4 years annual loss was $80 billion. The most damaged companies are those that have large R&D department. Such costs represent a disincentive to innovate, beyond being a cost influencing the final prices. The study also found that money will not be available for the other inventors, namely losses will not transform in an incentive for innovation. A third evidence certifies that we previously said: lawsuits are focused on software patents and nearby technologies, possibly involving more companies. This suggests that “litigation exploits weaknesses in the patent system… frequently … these patents is not clear, they are often written in vague language, and technology companies cannot easily find them and understand what they claim”. The conclusion of Boston University School of Law’s research is clear: “the loss of billions of dollars of wealth associated with these lawsuits harms society. While the lawsuits increase incentives to acquire vague, over-reaching patents, they decrease incentives for real innovation overall”.

Expert in ICT and sociology of media. This space contains occasional reflections on social and cultural aspects concerning processes and devices about communication and information.